I spent a quick 24 hours in Boston this weekend.  What I was most struck by on this trip was the concentration of repetition and patterns that seem to be integral to the urban environment in contrast to the randomness and diversity of a rural environment.  I haven’t put any thought to how this might be a metaphor for life in the two places, just that I became aware of the rich world of repetitive patterns that surrounded me in the city.  Here’s a relatively subtle example of that from the Seaport district. The photo in this example is too small to see all the patterns in the scene, but it was here as I took this picture that I suddenly began to see patterns everywhere. 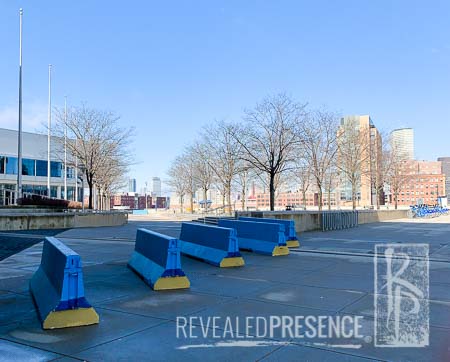 Question of the day…

When have you suddenly found yourself seeing the world around you in a different way?

A Tool for Creative Thinking

Intuitive Directions® is a boxed set of seven decks of photo/question cards designed for use by individuals or small groups to help gain clarity and inspiration.  More…

The Revealed Presence® Story Cards are postcard-sized photos with questions on the back.  They are designed to be used in large and small group settings to help deepen the conversation. More…


Warning: Use of undefined constant php - assumed 'php' (this will throw an Error in a future version of PHP) in /home/riverw13/public_html/revealedpresence.com/wp-content/themes/revealed-presence/footer.php on line 1